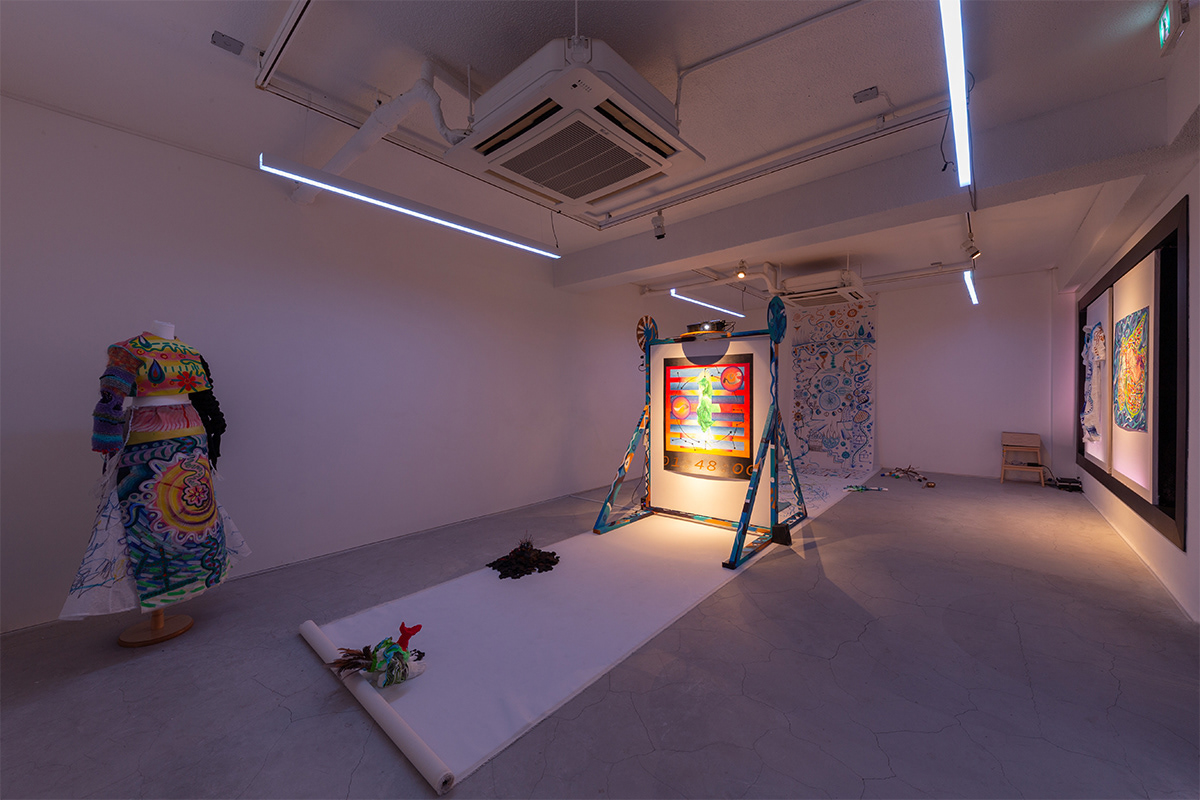 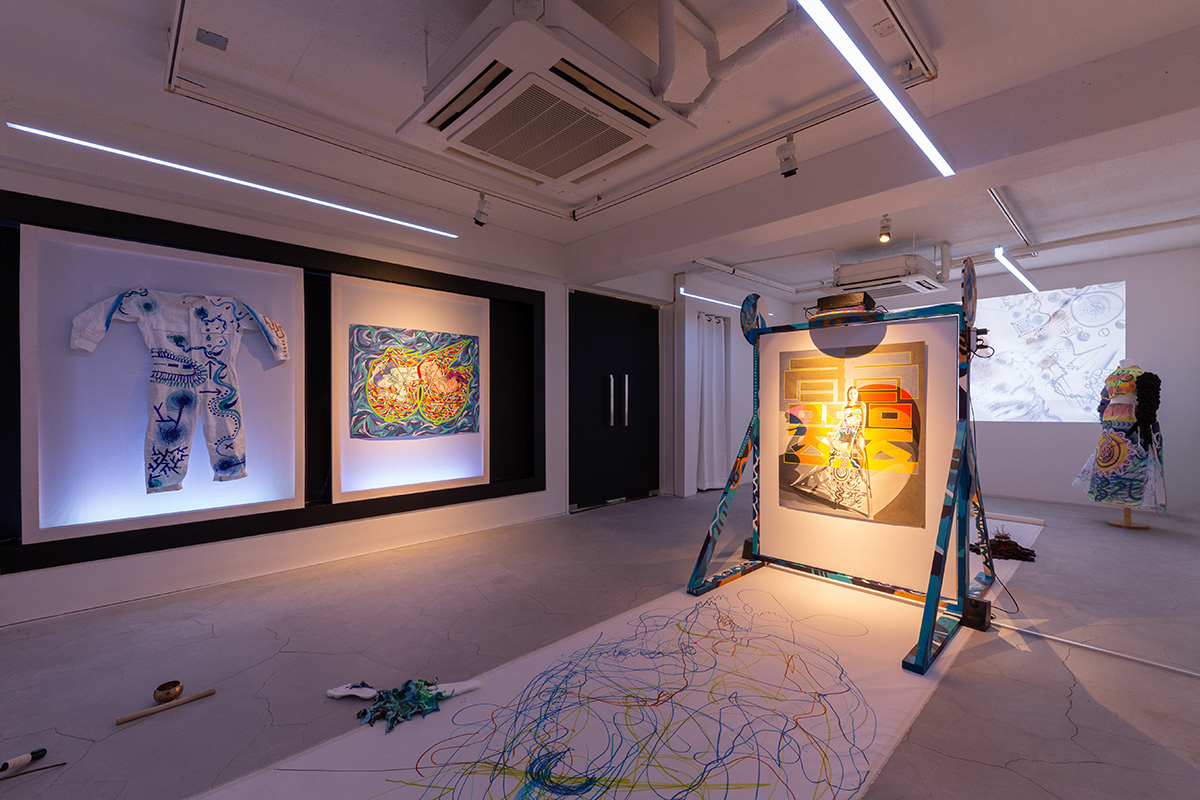 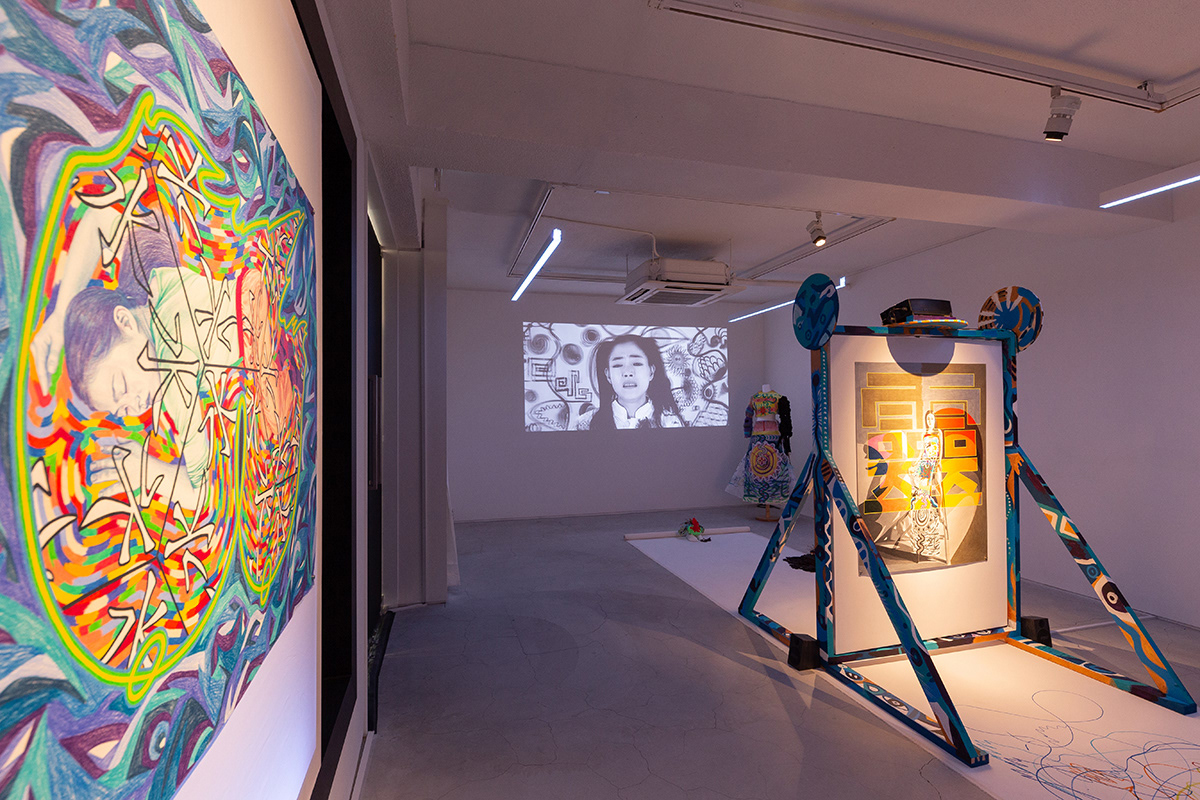 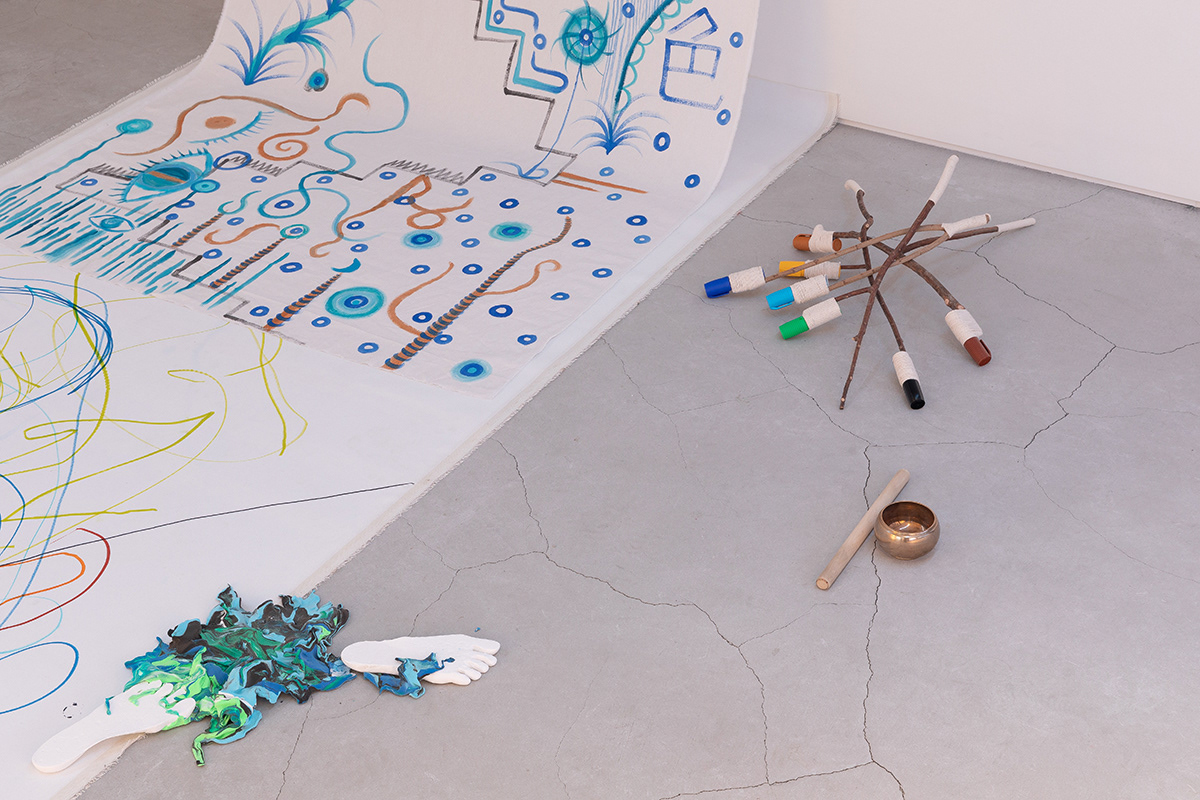 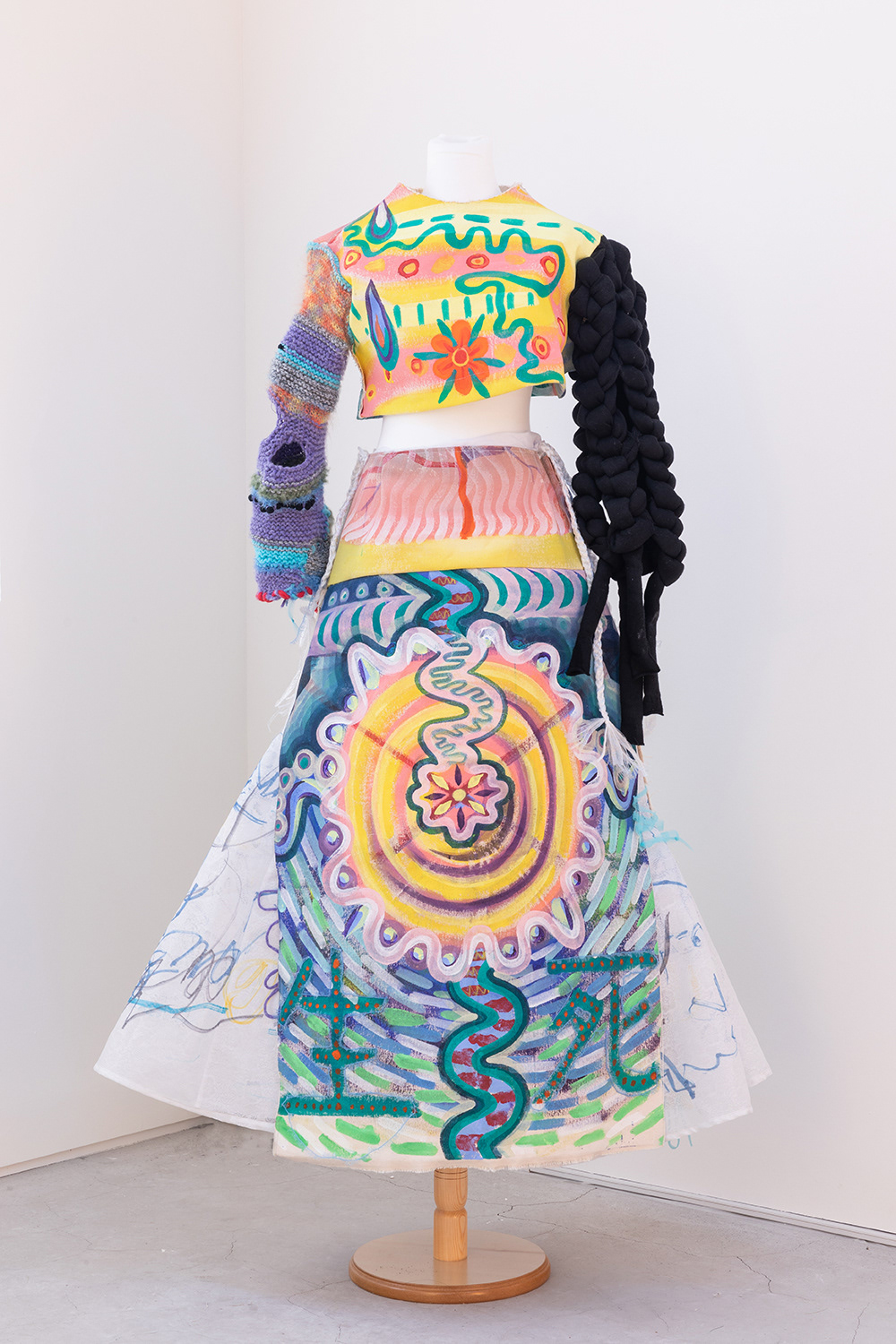 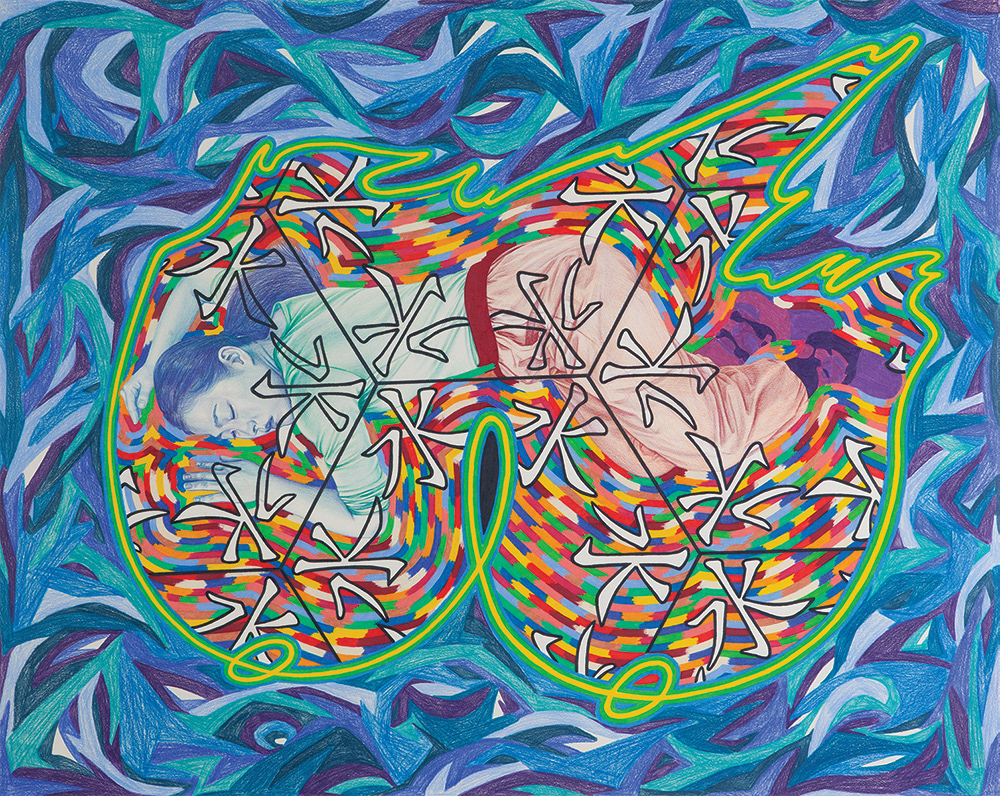 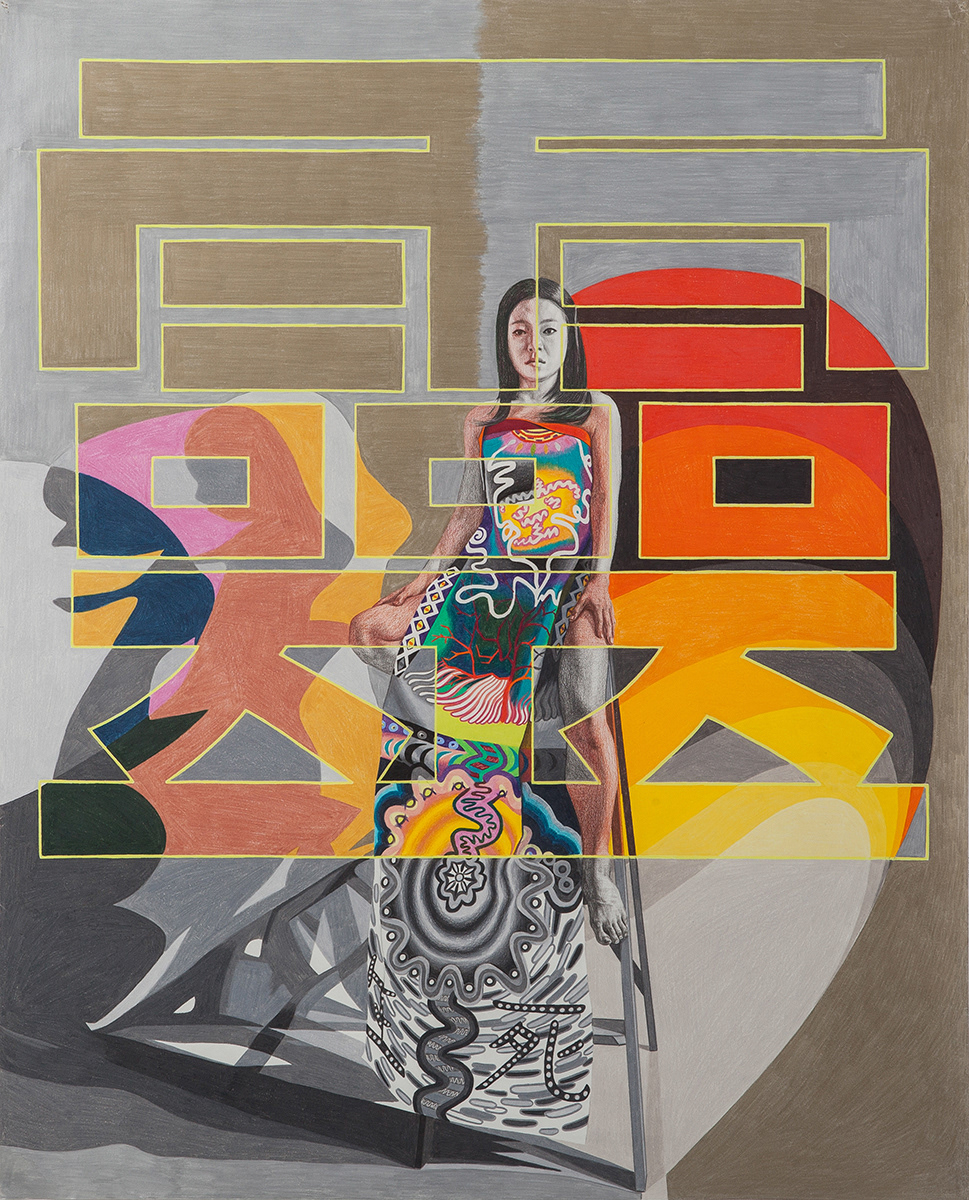 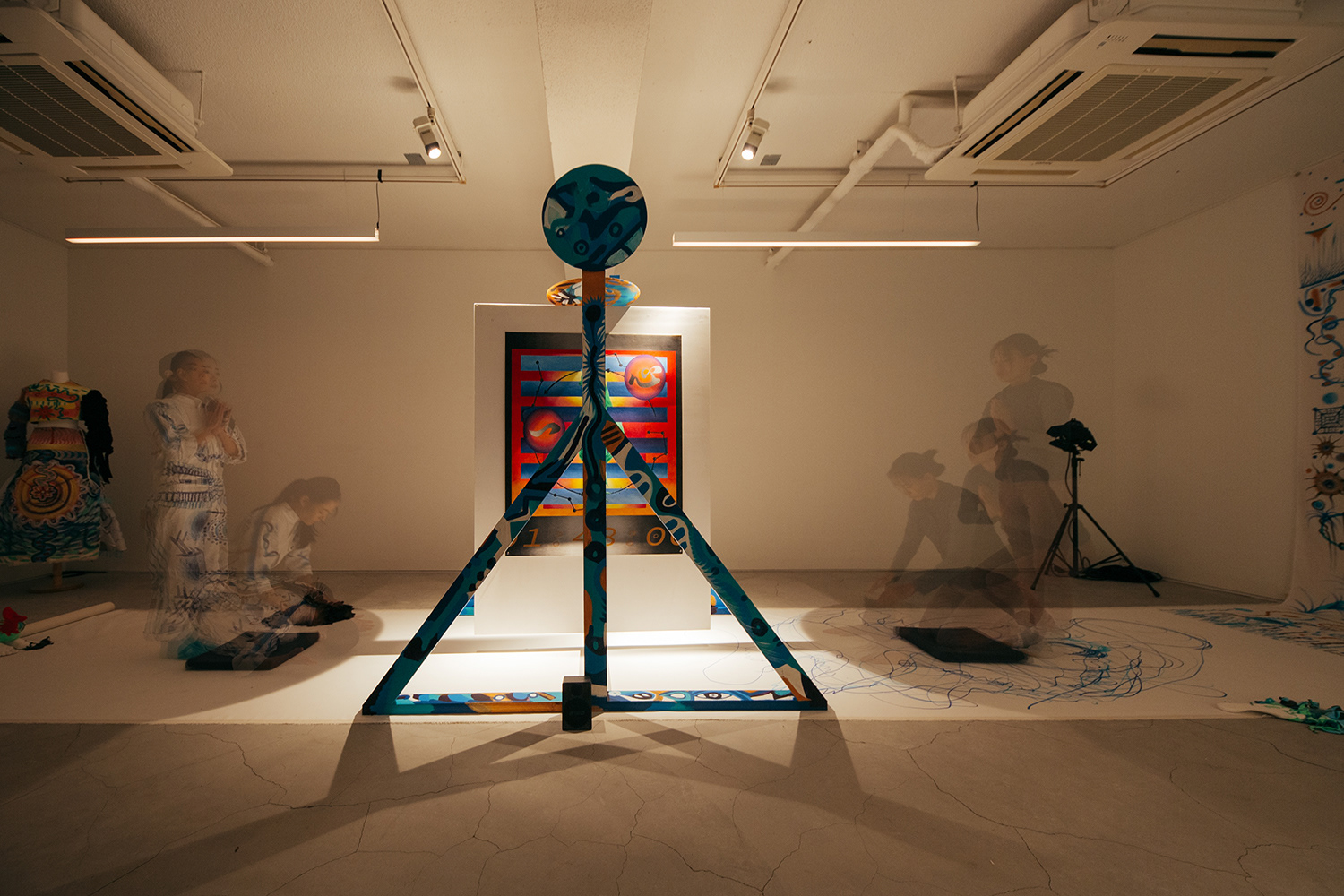 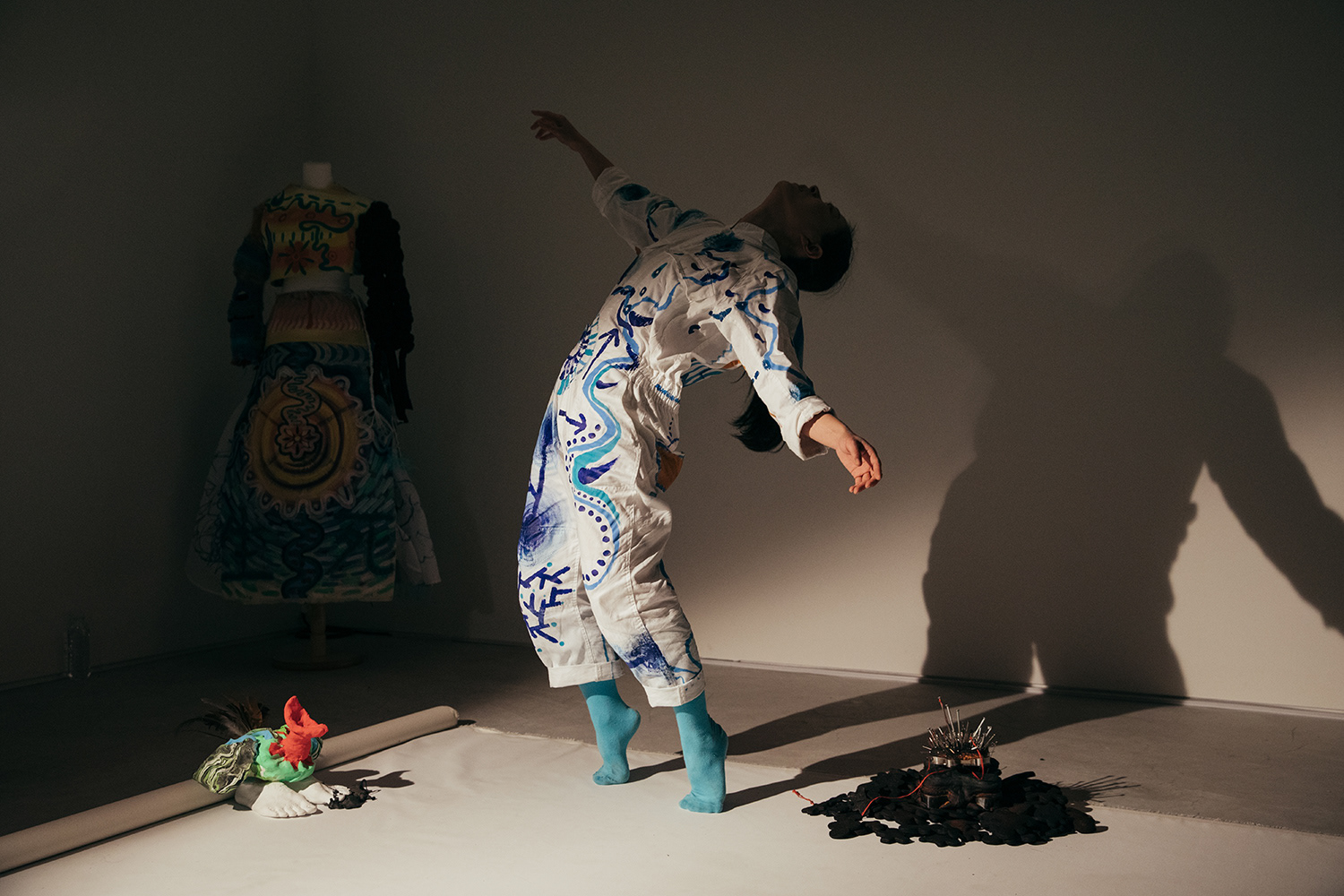 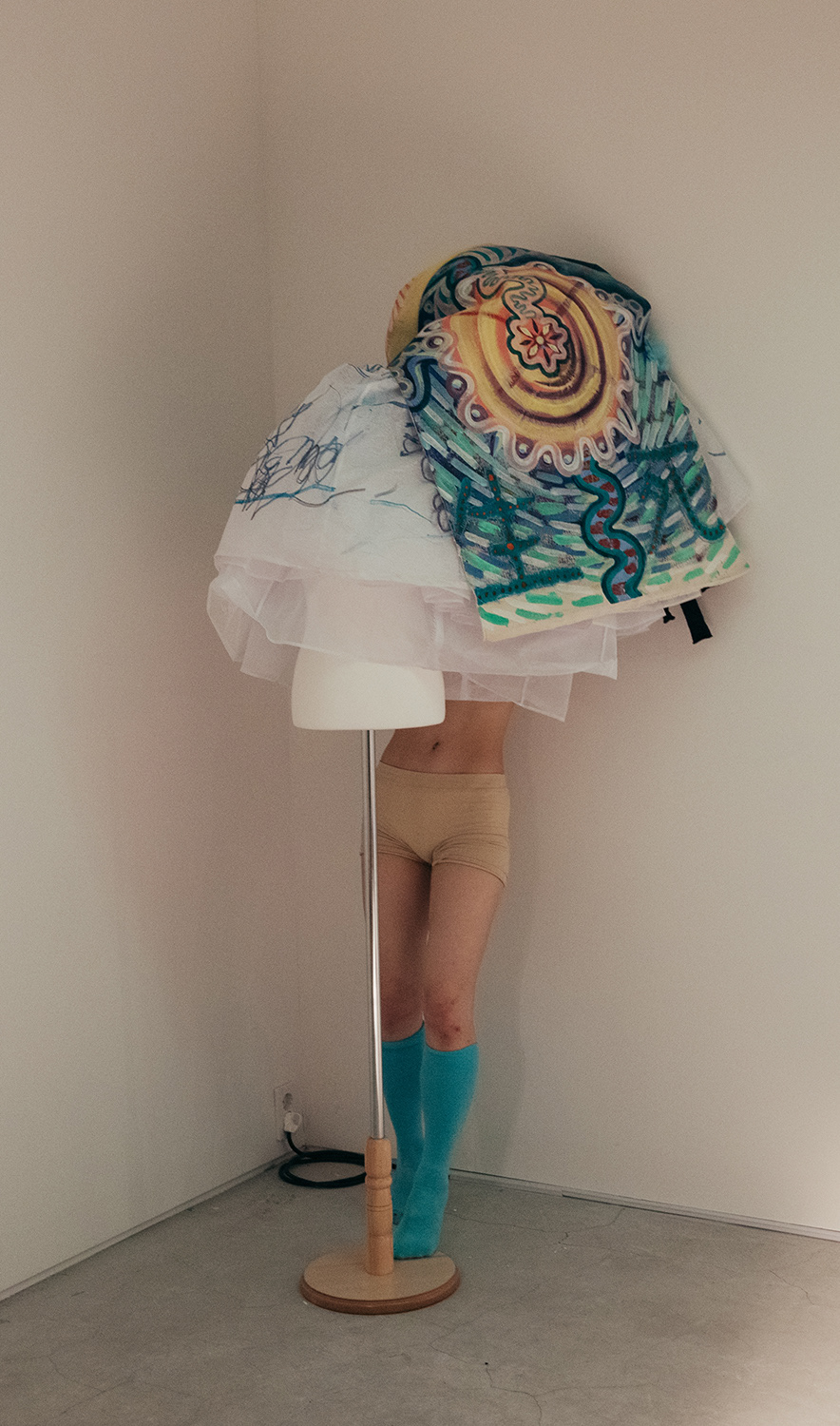 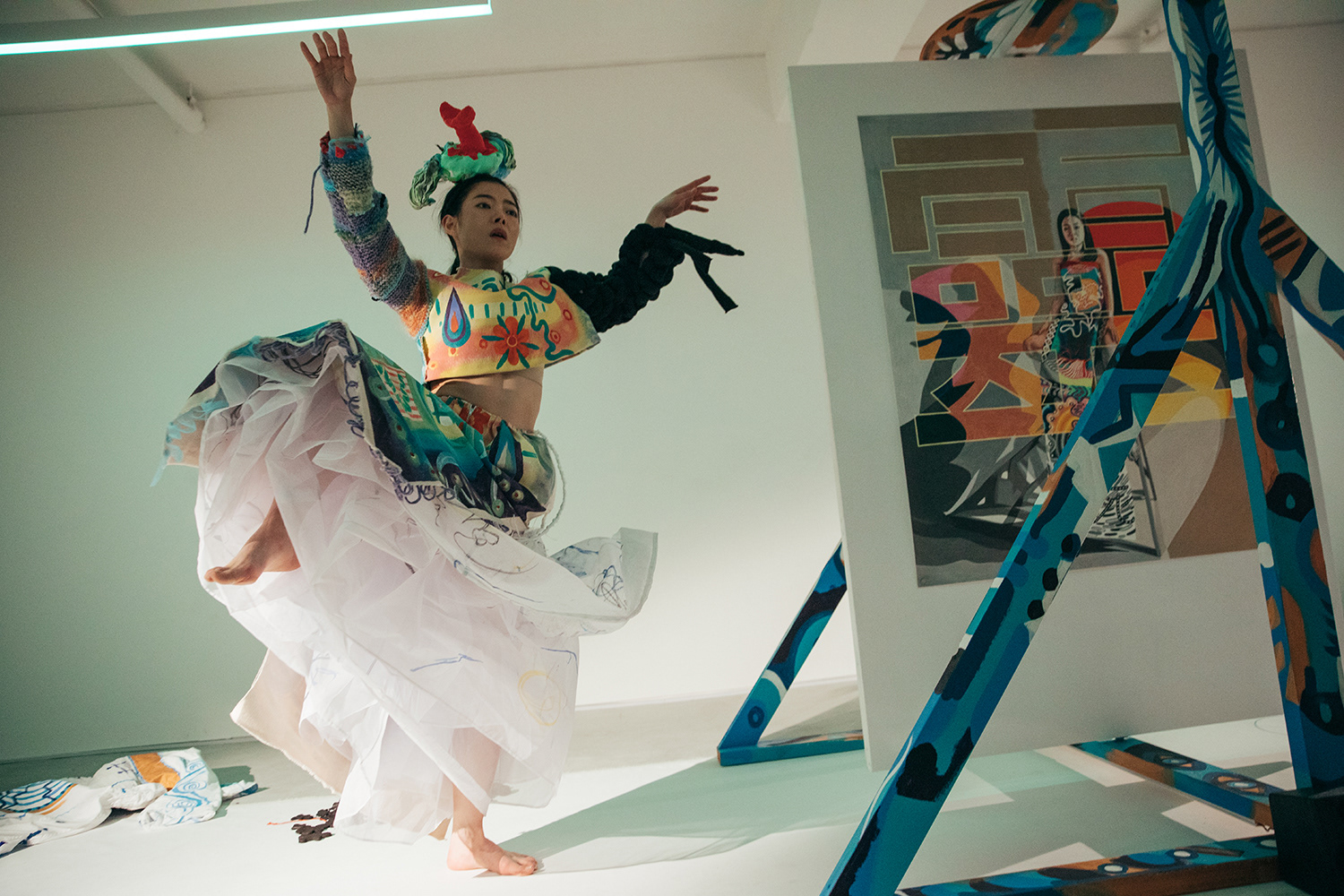 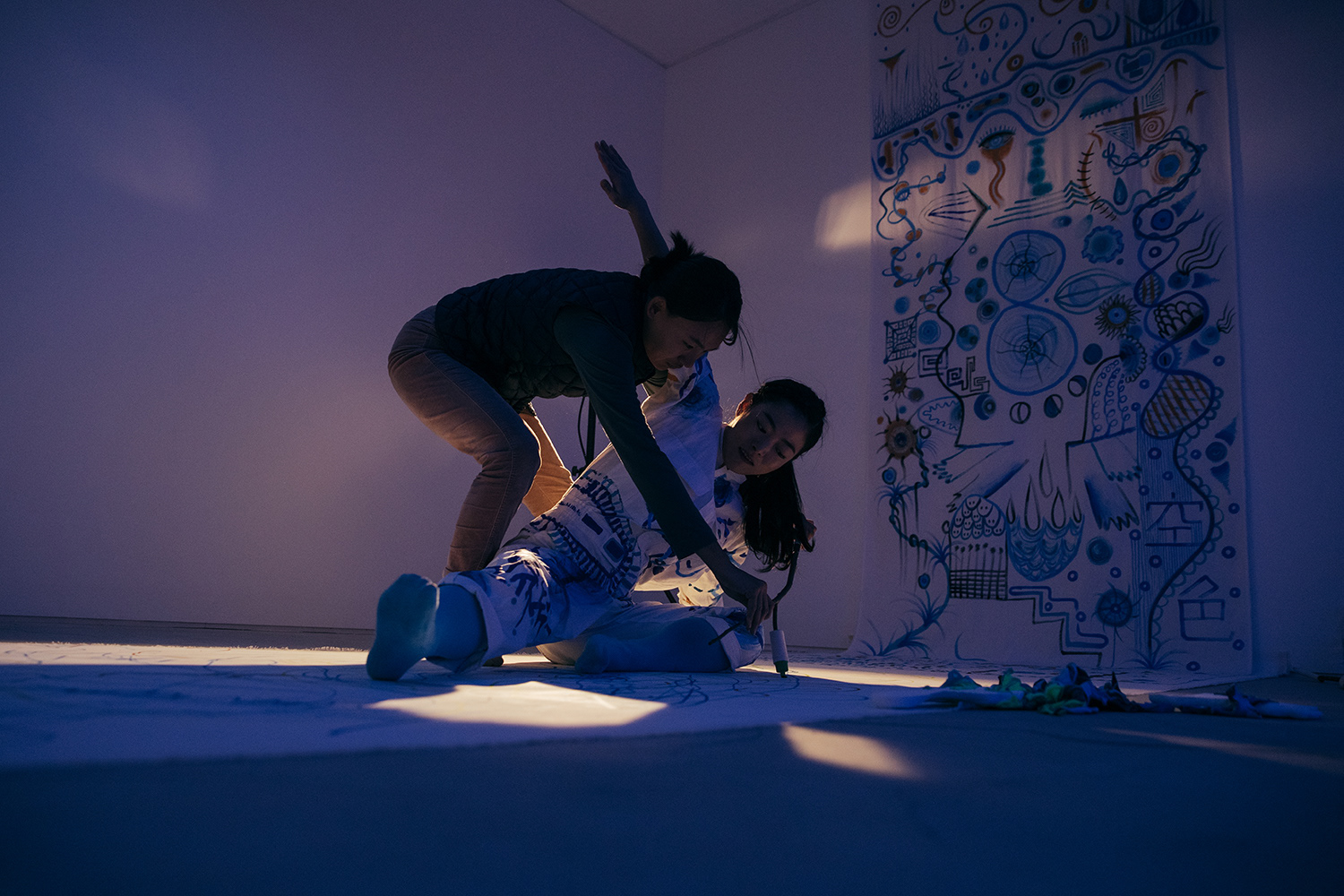 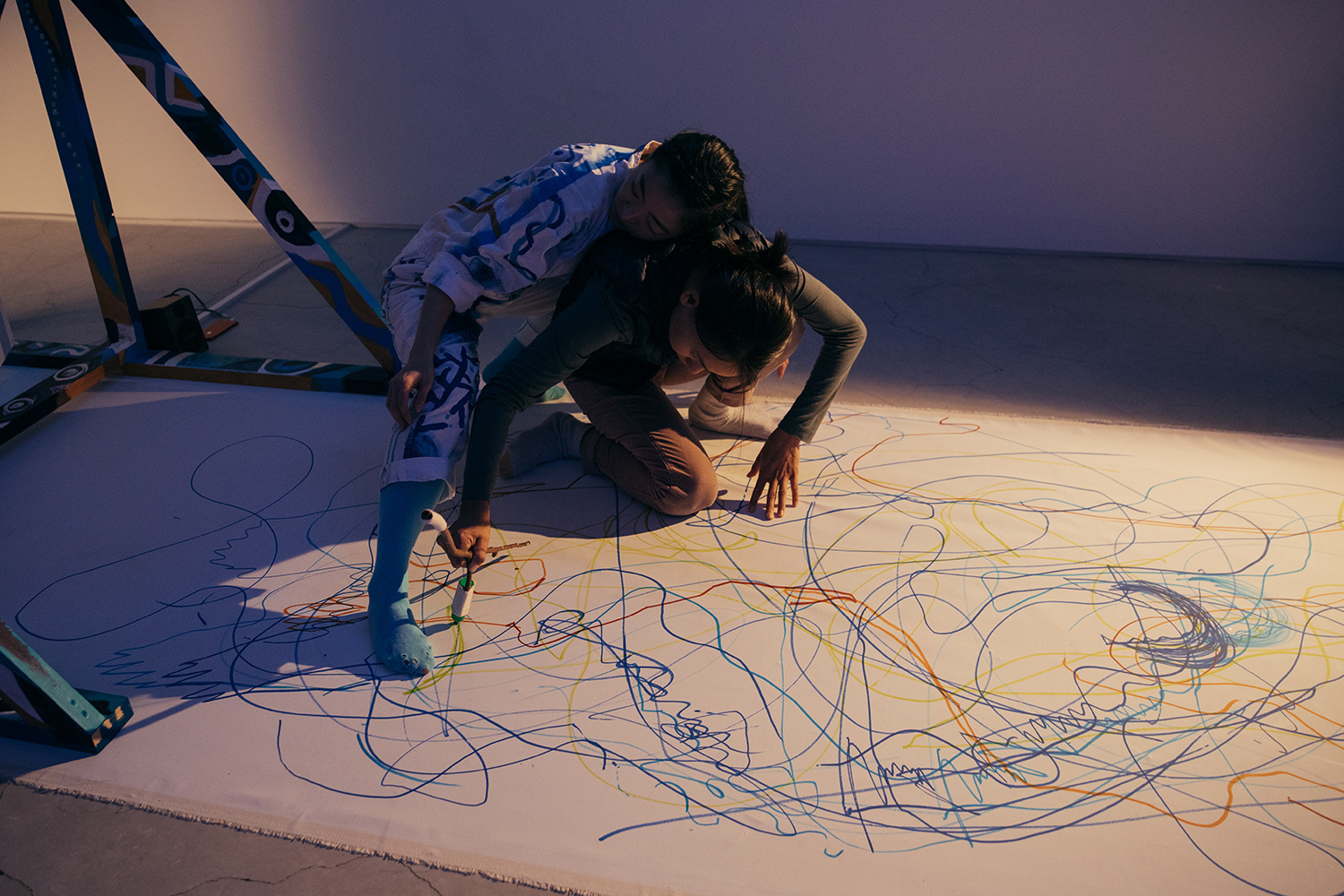 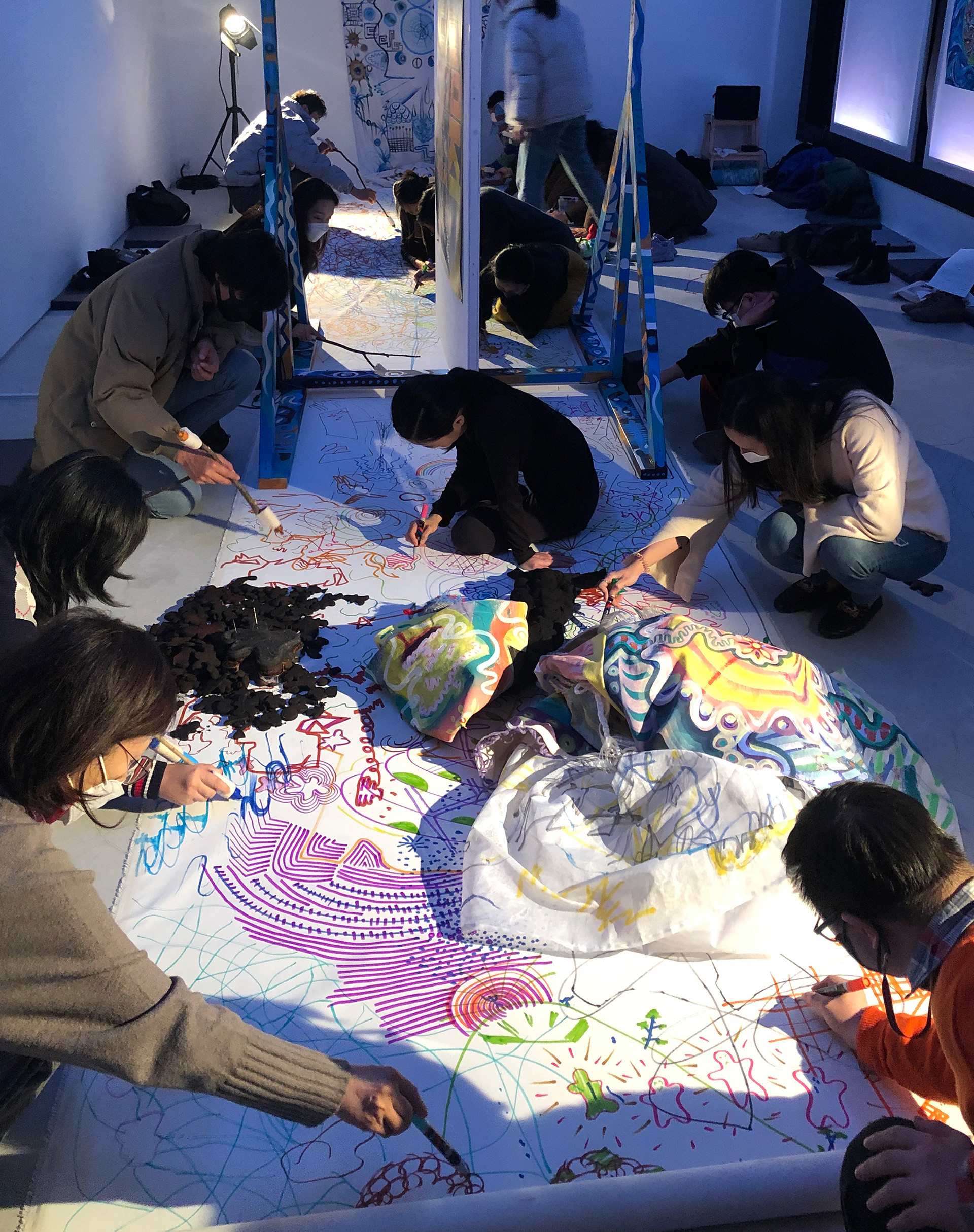 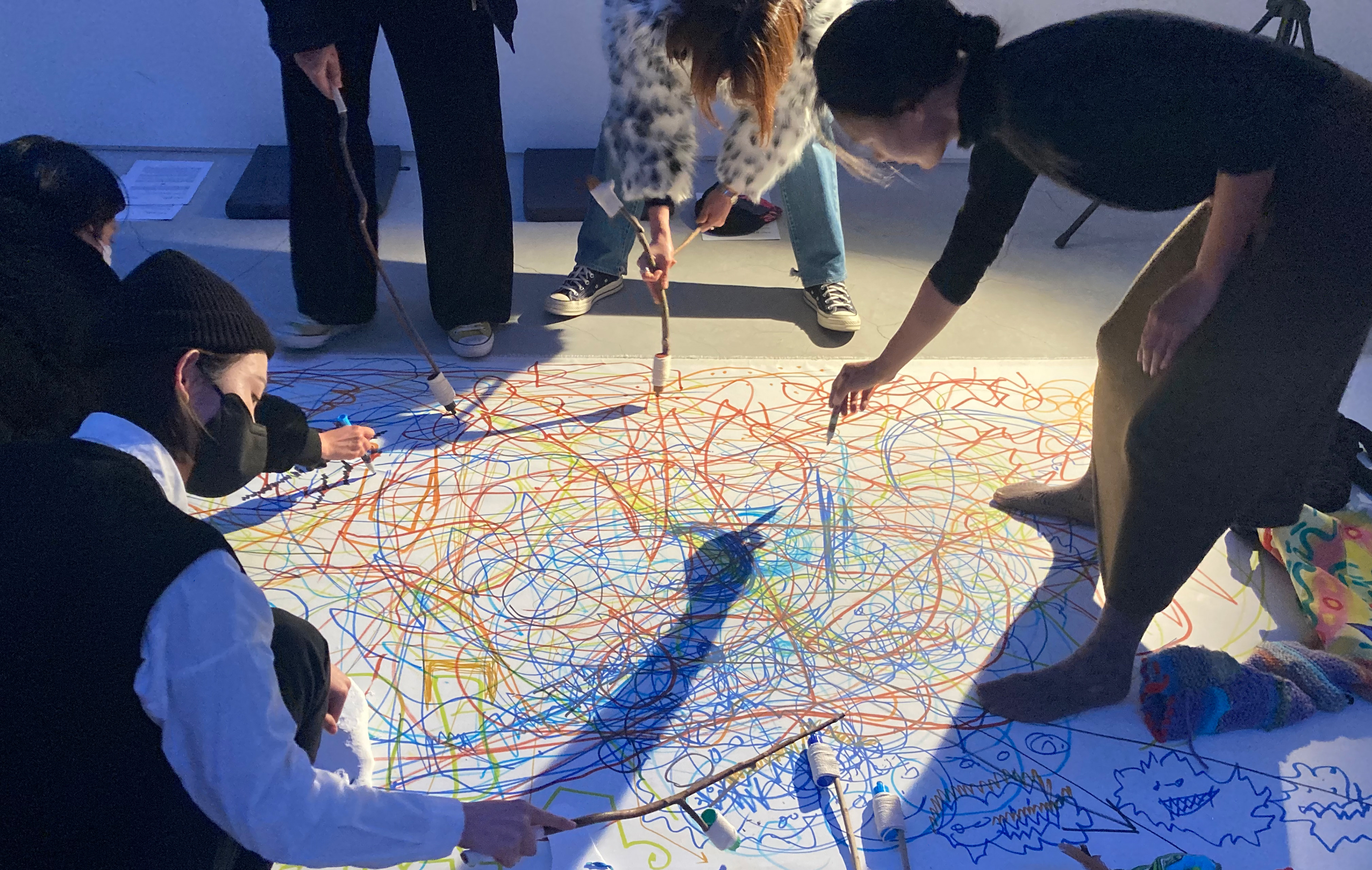 Exhibition text by Hyesu Cho
Muse :                        : Muse
Be-Muse : Wind and Unwind is better off without this text. In Against Interpretation, Susan Sontag describes interpretation as a conscious act, a kind of justification that began from the scientific approach of the Enlightenment. The kind of interpretation that Sontag opposes are the ones that establish a set of principles or construct a code to be deciphered. It is a perpetual cycle of translation that describes how X is in fact A, that Y is in fact B, and that Z is in fact C.
All the same, bear in mind that such translation work is yet again conducted in a language that has already gone through another translation. We chiefly live under a symbolic system of patriarchal language, in a world of interpretation that is imprisoned by such language.
Many contemporary female artists’ practices have been propelled toward the language before patriarchy, while facing the dilemma of having to translate her life with the language of the patriarchal world. As Freud took both texts and individual lives as cases for his interpretation, women, especially anonymous muses, have been disassembled, described, interpreted, and translated, as if they are some text, waiting to be justified.
Then, what justification should I inflict upon the two female artists who have decided to become each other's muse?
Here are two artists: an artist whose self-realization process was impounded by a global pandemic (Ahra Jo), and an artist who’s daily life embraces the irony of the symbiotic life where death is ordained (Yujin Lee). To practice being each other's muse, they chose silent forms (yoga, drawing, cooking, etc.) instead of elaborate language describing their relationship.
As revealed in their artist notes, all of their activities point back to the Buddhist concept of Sunyata (nothingness). “Nothingness is not nothing. Everything exists in a relationship.” (2021.3.14. Notes from Jo’s Essay Album) The core concept of Sunyata is that truth cannot be verbalized, and that all things exist interdependently. Their collaboration formed upon a foundation of other relationships that have emerged out of their oscillation. Their lovers, yoga teacher, animals and other worldly beings are not mere subdivisions of their relationship, but equal and distinct collaborators co-creating an extended web-like entity. At the same time, these elements also act as a kind of interpretive device that evokes life’s dilemmas for the artists.
Lee and Jo form their own interpretations by “be-museing” each other. And rather than translating this into language, they take on a non-verbal interpretation of collaborative art making--the process of reverting back to the everyday. In silence, a new form,                 *, surfaces between the two. It is a trace, a result of an action, Pratitya-samutpada, the “interdependent co-arising” or Nidana, “links.” (From Lee's studio note) The outcome may or may not be a physical work of art, as not all creative practices necessarily hold materiality. This guides us to recognize how the essence of art mirrors the concept of Sunyata.
Previously, the relationship between the artist and his muse was that of one-sidedness and exclusivity, which no one dared to intervene. However, here, situated between the gazes of these two muses is                 . Like the exhibition’s subtitle, Wind and Unwind, Lee and Jo’s new clothes are sewn with their exchanging breaths. With it, they are transformed into completely different individuals, while being the same person that they have always been.
Here is a chair of silence, willfully left unoccupied. I dread taking that seat and making a cacophony of interpretations (among other things). That would be reinstating the violence of language, and replacing “nothingness” with “nothing.” It feels like a betrayal. (Though this betrayal is inevitable. As we live in a world of language, where we are left to inadequately utter how we live in a world of language. And above all, I have agreed to participate in their collaboration as a “critic.” The documentation of our meetings leading up to this writing have captured my very best act of wiggling through it all.) When two female artists place 'be-' in front of themselves (as each other’s muses), where should the critic, who had always contemplated the relationship between the artist and her muse from afar, stand? As did the previous Nidanas, I invite the audience to join me by taking a temporary seat between Ahra Jo and Yujin Lee or dancing around the fringes of the                 . To some extent, this text is also my own contemplation of what it means to “be” a critic. If interpretation is a matter of + -, I want to take it with me at zero, leaving no traces behind.
*I used                  to mark the form of Lee and Jo’s collaboration because what they create sometimes lacks a concrete form. But more so, an image of a black rectangle seemed closer to the indescribable concept of Sunyata than such depleted words like a “thing” or “something.” 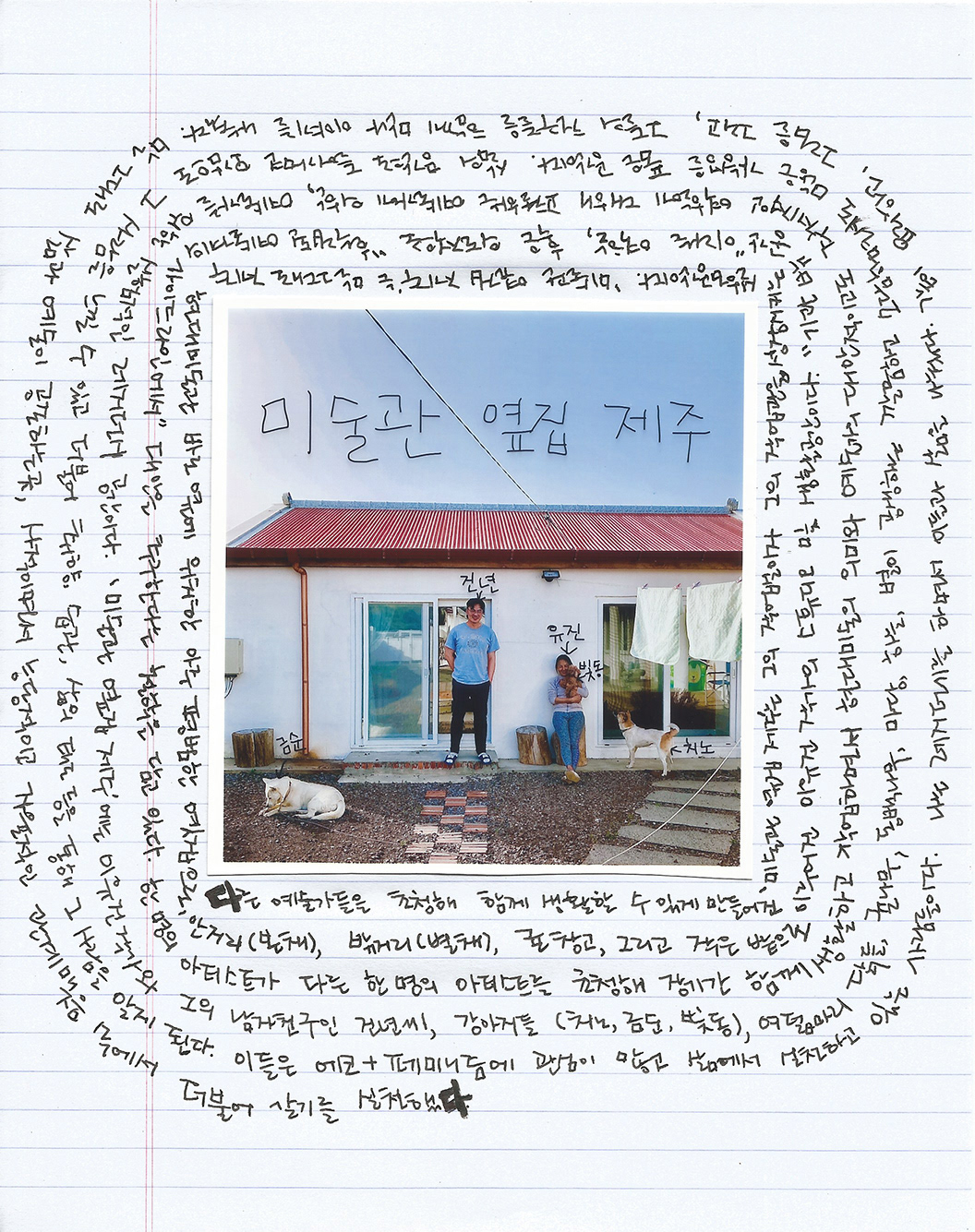 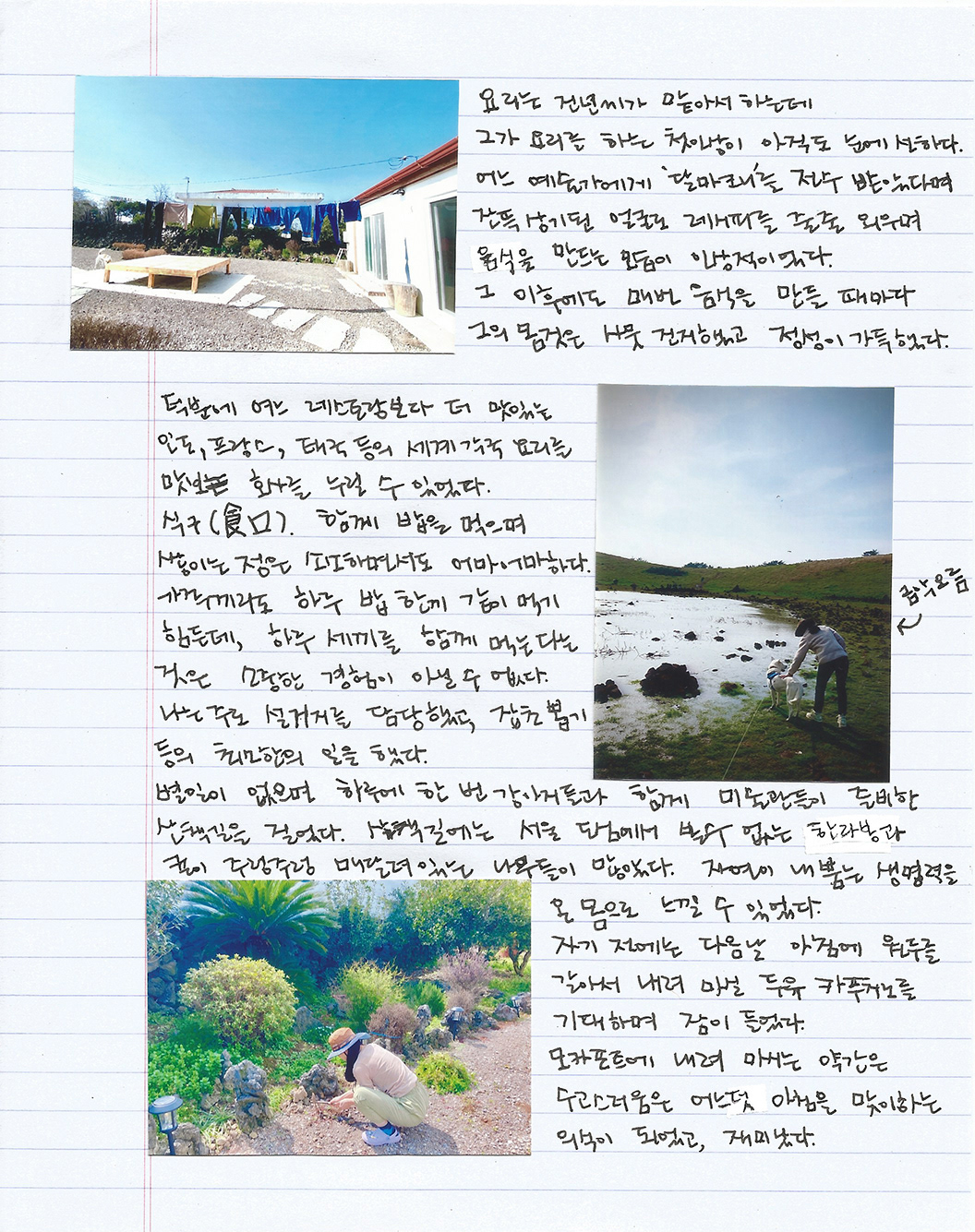 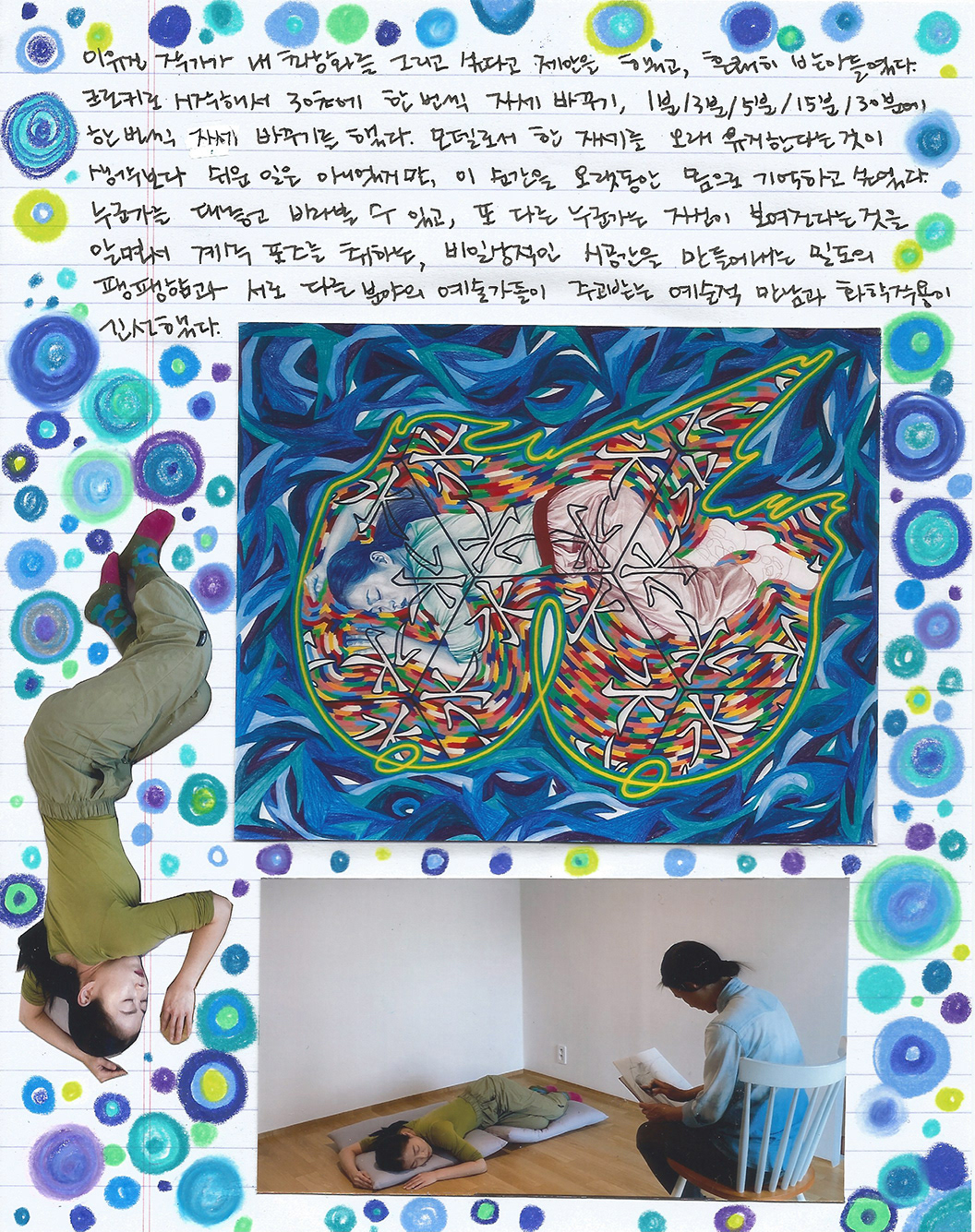 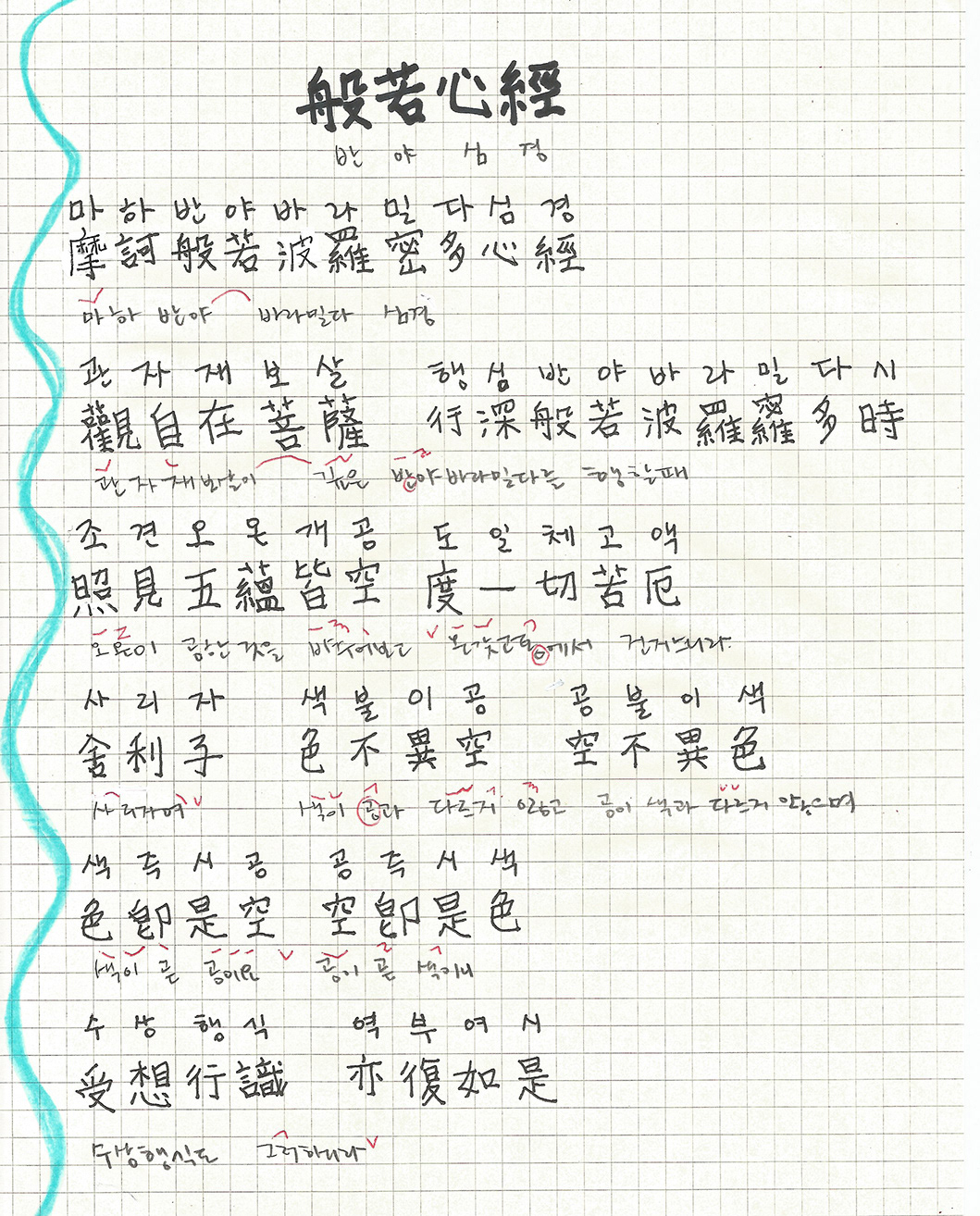 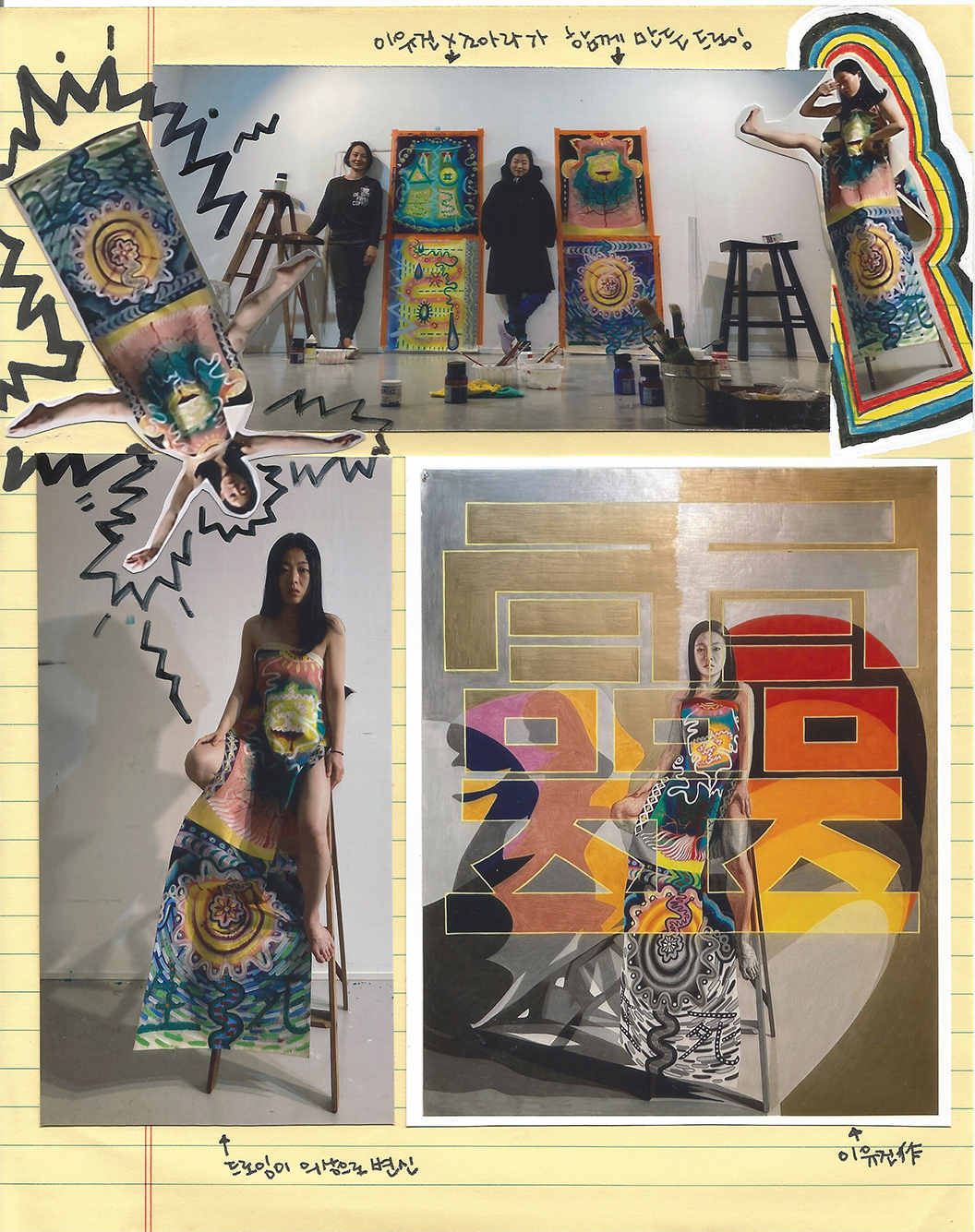 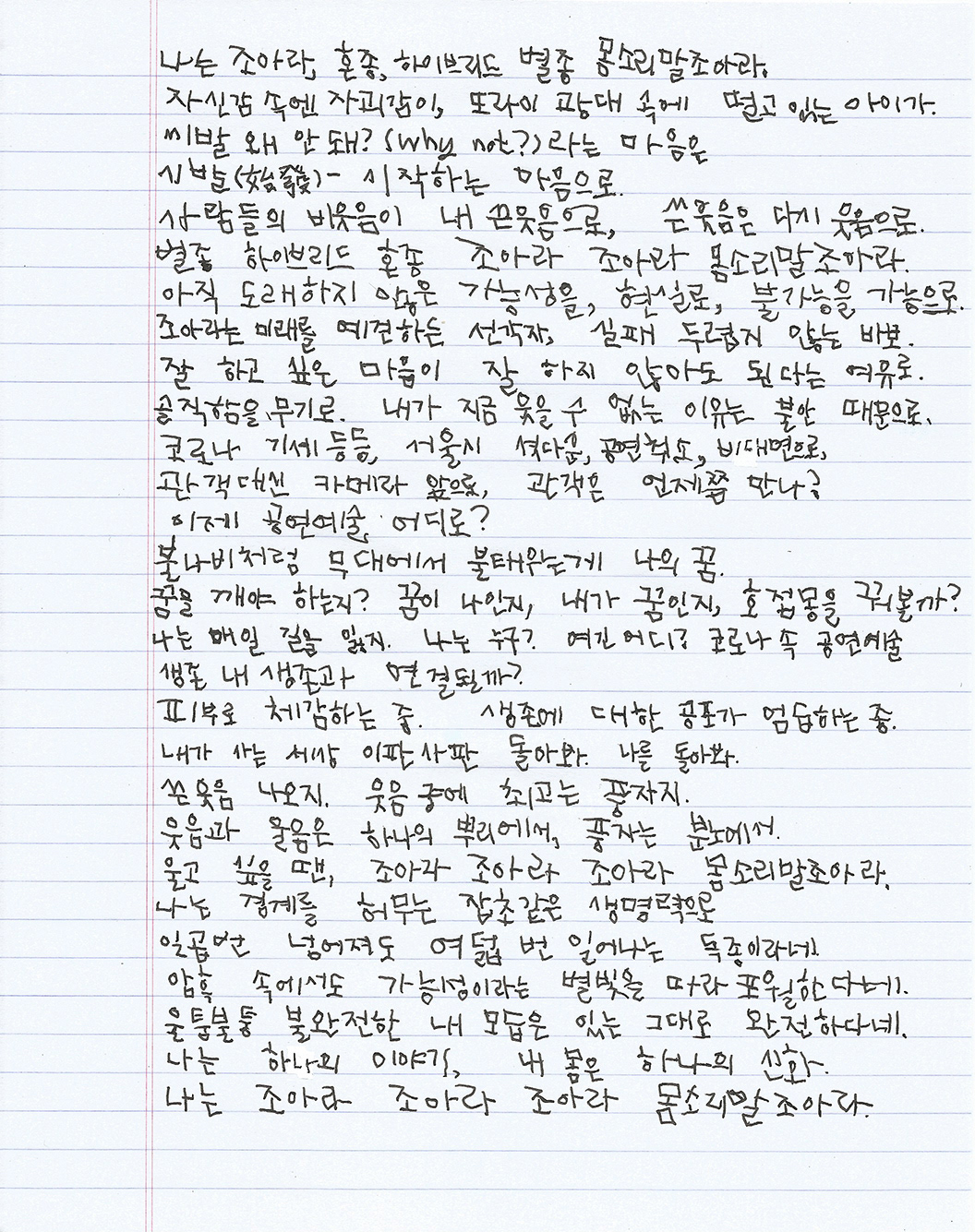 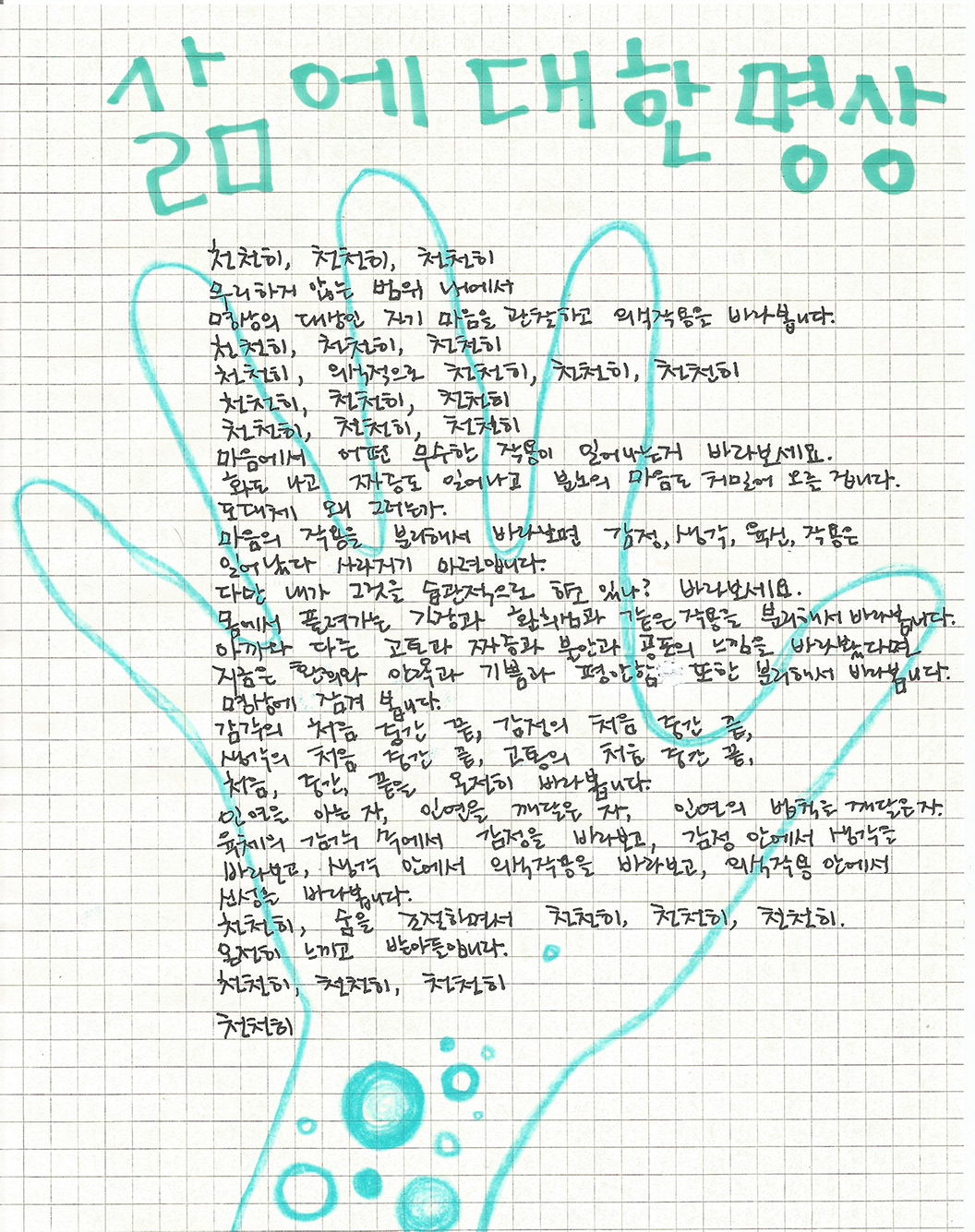 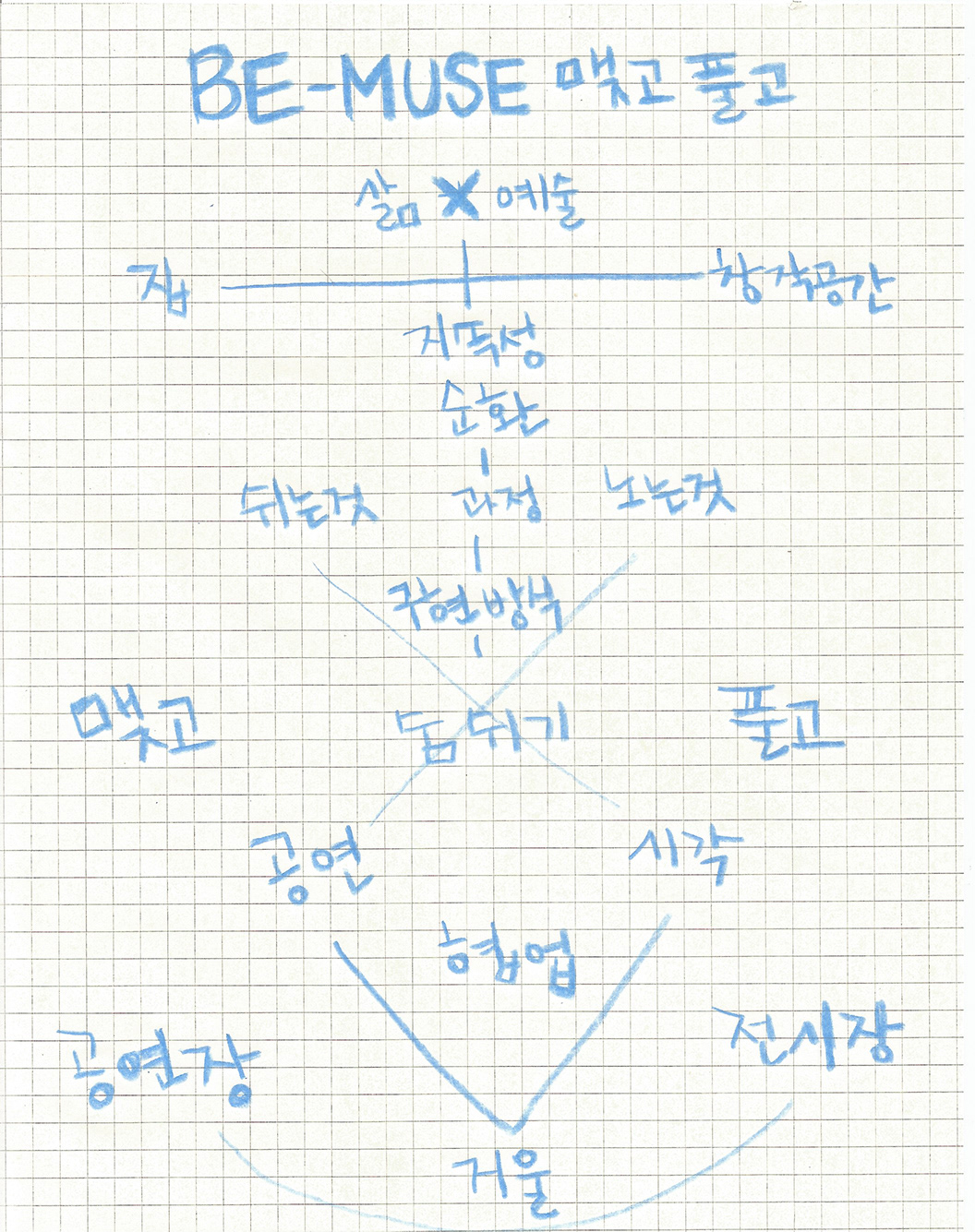 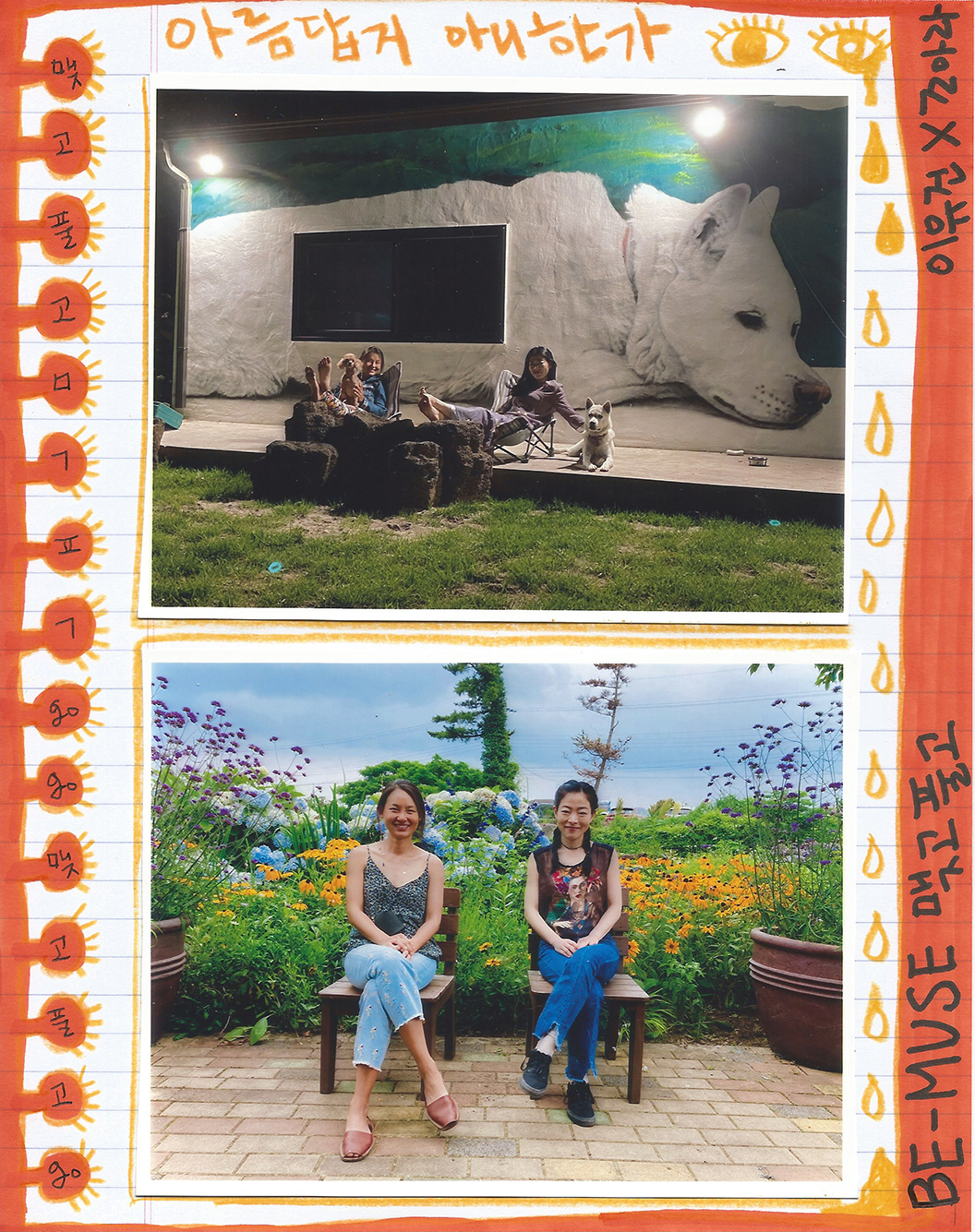 STRUCTURE FOR VISUAL ART AND PERFORMANCE : THE SHIP ON THE SEA, 2021